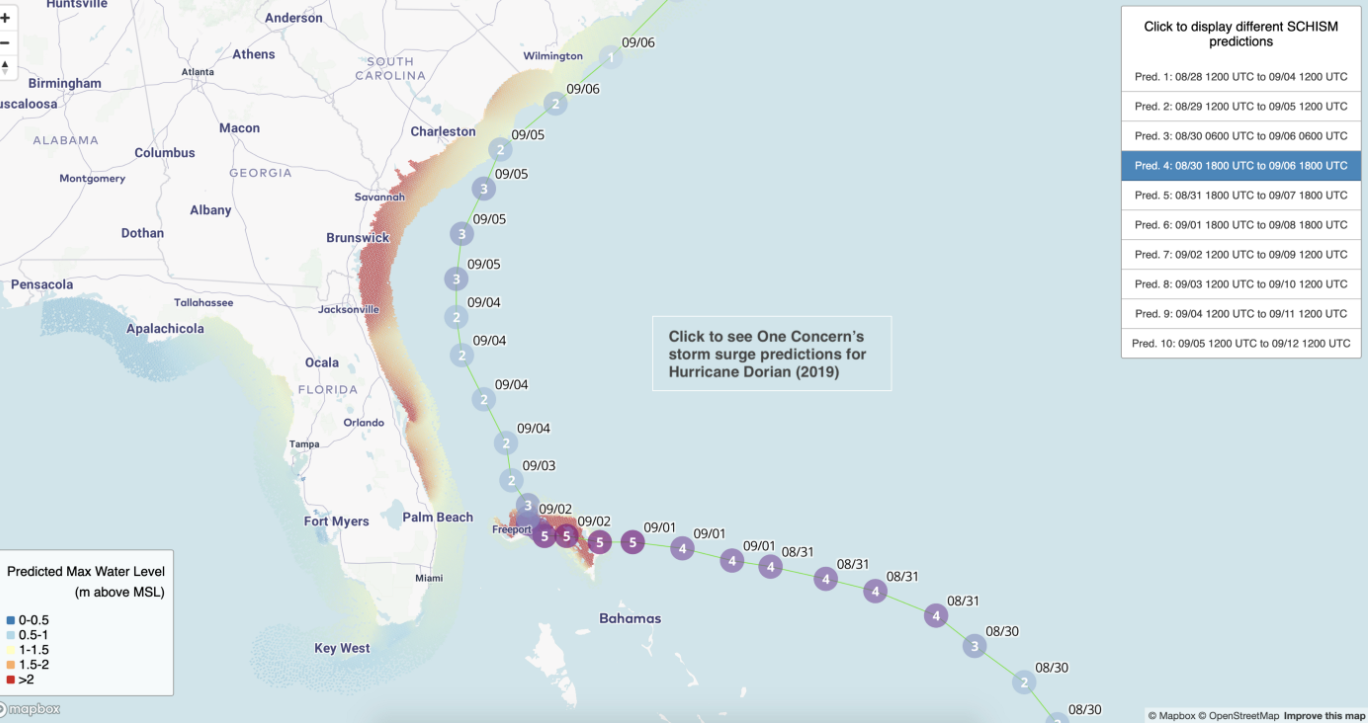 Note to reader: The model described below is in development by One Concern, as part of the company’s ongoing research into the challenging and increasingly important field of coastal flood modeling. All results are preliminary and for discussion purposes only.

In this article, we share the results from applying an advanced large-scale hydrodynamic model, SCHISM (Semi-implicit Cross-scale Hydroscience Integrated System Model) with hurricane forecasts as inputs (see left panel of GIF below), during Hurricane Dorian to predict the storm tide, a combination of astronomical tide and storm surge, along the coastlines of the Bahamas and entire U.S. East Coast (see the right panel of GIF below). The predicted potential impacted areas were compared with satellite images in Grand Bahama Island, and the predicted peak water levels were compared with NOAA tidal gauge observations along the U.S. Southeast Coast. The predicted coastal water level shown can be used to drive local inundation models to provide coastal flooding forecast.

The highlights of this case study are:

To set the stage, there are a few definitions and pointers about hurricane predictions we will want to clarify before sharing the results of our model.

It is very important to note that our storm surge model doesn’t predict whether or when a hurricane will make landfall in a certain place, but rather predicts the potential storm tide given inputs from hurricane forecasts. The left panel of the GIF above shows a total of 10 selected NOAA’s forecast tracks published between August 28 and September 5 during Dorian. In the figure, it is apparent that the hurricane forecast track changed frequently and dramatically during this event. For example, in early August 31, the forecast completely changed from “Dorian making a landfall in FL” to “Dorian NOT making any landfall.” High uncertainty in hurricane forecasts means it is important to run predictions as soon as the forecast is updated to provide the most possibly accurate results.

Due to high uncertainty in the input hurricane forecasts, we decided to monitor the storm and run 7-day storm tide predictions each day beginning August 28 to have the most up-to-date results. Thus, the predicted results for each seven day period would change daily, as hurricane forecasts were updated.

Each one of these 10 forecast tracks was generated by NOAA integrating various atmospheric forecast models including GFS (Global Forecast System). We chose GFS forecasts as SCHISM’s atmospheric inputs because GFS is being used as NOAA’s flagship weather model. Each of our SCHISM predictions were based on the GFS forecast used to generate the NOAA’s published forecast track. This can explain why for each of the 10 predictions made the storm surge prediction changed frequently during this event as the forecast track changed. Below, we presented all of 10 predictions to show you the dynamics of storm surge prediction during a hurricane event (shown in the right panel of the GIF above). The accuracy and confidence in the predictions are typically expected to improve as updated hurricane forecasts are used.

We built an interactive map (shown at the beginning of this post) to present the 10 predictions of peak water levels along Grand Bahama and U.S. coasts during Hurricane Dorian. The user can zoom and pan around to see the max water level estimates along with the categories and locations of Dorian which are marked along the preliminary best track published by NOAA’s National Hurricane Center.